Achieving a robust cybersecurity posture has been mission-critical as businesses experienced a staggering spike in cybercrime last year. A new organization reportedly fell victim to a ransomware attack every 10 seconds, making cyber security a top priority across industries: 91% of surveyed organizations increased their 2021 budgets to tackle persistent cybersecurity challenges.

However, to truly improve future security outcomes, organizations must invest their resources to change their foundational approach to cybersecurity, shifting from a reactive to proactive state. For too long, teams have addressed security at the end of a software development life cycle, often relying solely on security professionals to find and resolve threats. Supporting technology, too, has historically been programmed to identify security attacks after the fact, when costly damage is already done.

These traditional approaches to software security raise significant challenges for developers, IT operations and security professionals, who hold a negative outlook about their organizations’ ability to account for increasingly disruptive threats. A recent survey of executives revealed they were least confident in their organizations’ security roadmap, followed by their tools and technology and internal teams’ skill sets, prompting the urgent need for a change.

Now, more teams are turning to DevSecOps, which is a holistic approach to security that ensures software releases are produced both quickly and securely. By following specific approaches during software development processes, teams can account for risk and compliance and avoid increasingly costly implications of these top security challenges.

Sloppy coding habits—such as not checking copied code for vulnerabilities or sourcing code from outdated libraries that haven’t been checked by trusted developers—can provide hackers entry points to perform an attack.

When teams move sloppy code through the development life cycle and vulnerabilities are only detected later on, developers often have to begin writing new code, which is a time-consuming process that slows down deployment timelines.

Software development timelines are typically designed to deploy software releases as efficiently as possible, which often pushes security testing to the end of the development process, usually with little time to conduct. Teams risk finding threats too late, or missing them altogether, in effort to prioritize a fast release. If a threat is identified after a project has moved through development and is released, however, developers have to do lengthy patchwork, impeding other project timelines in the process.

While testing is a critical security measure before deployment, it’s equally necessary to continue monitoring applications for security after the release to identify potential vulnerabilities that were missed earlier on, and also defend against innovative attack methods. Without continuous monitoring, threats can go undetected for months at a time, compromising sensitive information and putting businesses and their customers at risk.

Highly regulated industries such as healthcare, finance or government require developers to follow specific guidelines as they build and deploy software. These regulatory standards, like HIPAA or FedRAMP, are subject to change and evolve over time, putting extra pressure on teams who already need to account for industry best practices like adopting two-factor authentication, building firewalls and more, to keep highly sensitive data safe.

Each of these challenges weigh on organizations’ threat defense, but they can be more effectively addressed by adopting DevSecOps. First, DevSecOps requires developers to build continuous security checks into their coding workflow, allowing them to catch and surface threats to security professionals before code is moved on through future stages of the development cycle.

Then, as software enters the testing phase of development, teams introduce automated and repeatable processes for more efficient and effective threat detection. And after the code deploys, teams leverage tools for continuous monitoring and controlling so threats don’t go unnoticed once the application is live. Security policies, too, are accounted for by building test scripts into developers’ code, so once teams code against policy standards, teams can continue building.

With the right technology, such as DevSecOps tools from Atlassian or GitLab, organizations can benefit from DevSecOps adoption. However, transitioning security processes correctly takes time. From educational support about how DevSecOps processes work, to vetting and the tool selection processes, to implementation and ongoing coaching, a DevSecOps partner like Contegix can help organizations make the transition to bolster their security efficiently. 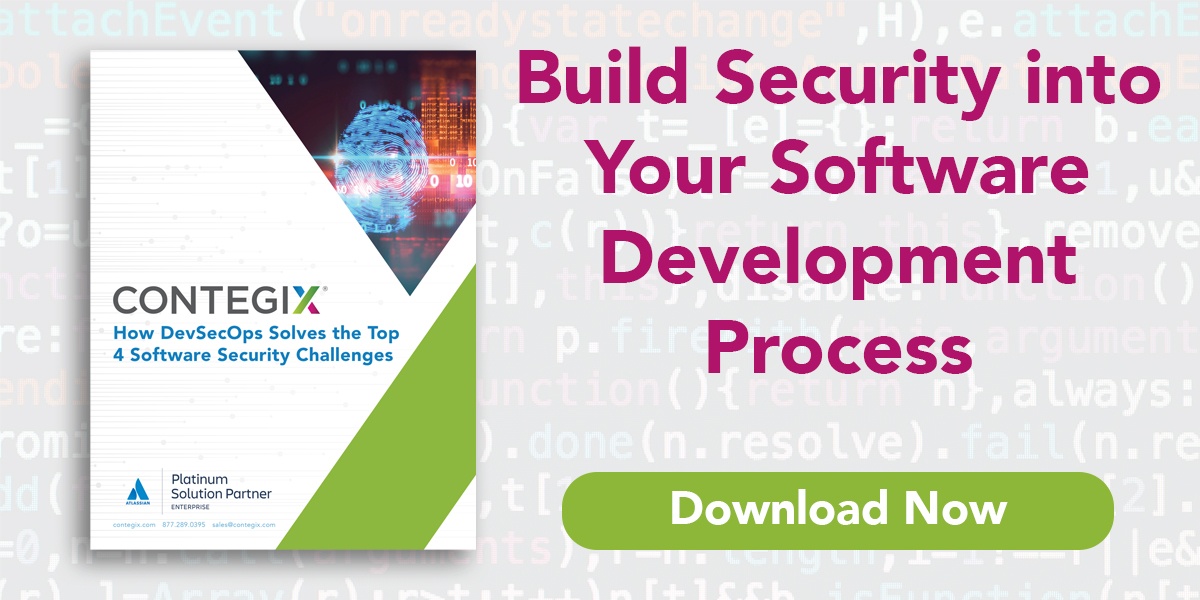